Every ten years, Hidalgo County Commissioners’ Court is tasked with the responsibility of redistributing the population equally among the four precincts. The 2010 Census figures indicated an imbalanced population distribution due to substantial population growth in some parts of the County, while other areas experienced a decrease in population. As a result, County Commissioner precinct boundaries must be redrawn to evenly distribute the population; the redistricting will also affect justice of the peace and constable jurisdictions.

The attorneys hired by the County for redistricting services have drawn proposed maps. 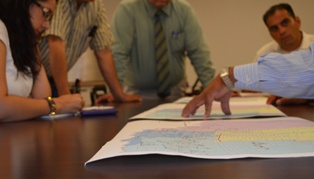 Hidalgo County Commissioners’ Court has held three public hearings to give the public the opportunity to comment on proposed County Commissioner precinct maps. As a result of the input submitted at these hearings, the consultants along with the members of Commissioners' Court are modifying variations of the proposed maps.