Create an Account - Increase your productivity, customize your experience, and engage in information you care about.

Arturo Guajardo, Jr. graduated from the University of Texas Pan-American in 1992 with a Bachelor’s Degree in Political Science and graduated with a Master’s Degree in Public Administration in December 2009. His work experience includes one year of teaching with Donna ISD, seven years with the law firm of Calame, Linebarger, Graham and Pena, LLP and eight years as Chief Deputy County Clerk. Mr. Guajardo is also a certified mediator.

Mr. Guajardo was elected Hidalgo County Clerk in 2006 and took office January 1, 2007. He entered his second term in January 2011 and is now in his fourth term which began in January 2019. As your County Clerk, he has worked hard to streamline and automate procedures that have increased the office’s efficiency and productivity. He is committed to making government more accessible to the public and is dedicated to saving taxpayer dollars as evident through his continuous efforts to use innovative, environmental and cost efficient methods. As a devout public servant, he has maintained his close ties to the community by spearheading many give back campaigns that promote helping communal members in need. 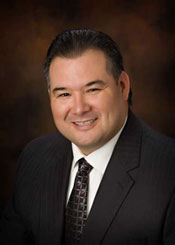 During his first term in office, Mr. Guajardo partnered up with the University of Texas Pan-American by offering his office to graduate level research studies and establishing internship opportunities.